Exoskeleton is a wearable robot that gives “superhuman” physical abilities in terms of strength, speed, balance, or basic locomotion where it wasn’t possible before.

Eythor Bender of Berkeley Bionics brings onstage of a TED conference two amazing exoskeletons, the HULC (Human Universal Load Carrier) and the eLEGS – robotic add-ons that could one day allow a human to carry 200 pounds without tiring, or allow a wheelchair user to stand and walk. Eythor sees it as “the true integration of the man and the machine.” Which can also “integrate and network you to the universe and other devices out there.” 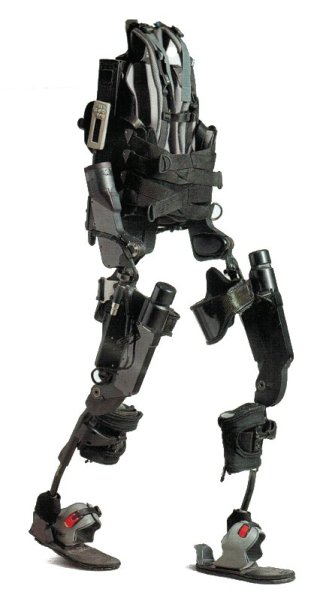 HULC helps to carry up to 200 pounds over varied terrain for many hours. “Its flexible design allows for deep squats, crawls and high-agility movements. It senses what I want to do, where I want to go, and then augments my strength and endurance.”

eLEGS is designed for the 68 million people estimated to be in wheelchairs worldwide, or 1% of the total population. “Oftentimes it’s very young individuals with spinal cord injuries, that in the prime of their life have the wheelchair as their only option. It’s also the aging population that is multiplying in numbers. The only option after a stroke or other complications, is the wheelchair. To deal with, is the eLEGS, completely non-invasive, it has sensors in the crutches that send signals back to an onboard computer. Battery packs power motors at the hips and knee joints, that move the person forward in a smooth and natural gait.”

You can see the demonstration of these technologies at this TED conference: