Swale is a floating “food forest” launched in the New York waterways in the spring of 20016. The floating island purifies the river water while nourishing the trees and plants onboard. It’s built from repurposed shipping containers from the Port of New York and New Jersey.  It’s planted with edible perennial plants gifted from businesses and individuals in the tri-state area, in a cooperative growth and harvest effort. This visual by Mary Mattingly from June of 2015 depicts the floating food forest. 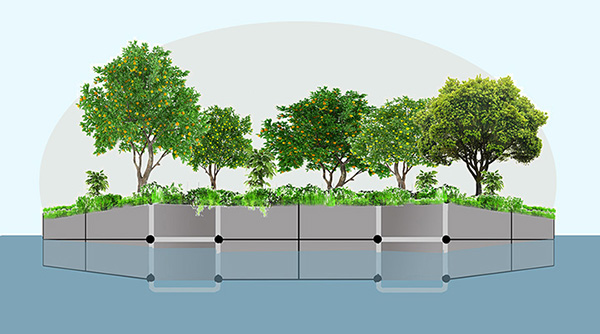 “Swale is a collaboratively created floating food forest for New York City. A 50-foot diameter floating platform contains a gangway entrance, walkways, and an edible forest garden. Technologies on Swale purify New York City’s river water and use it to produce fresh food. A sculpture and a tool, Swale can connect us with an entire ecosystem.” Artist Mary Mattingly through the project “Swale” encourages more public interaction with the many waterways of New York, creating more access to public space where it may limited, as “experimental zones that can be both interdependent and autonomous.”

Mattingly has explored mobile, nautical art before, including the “Waterpod” (2009) and “Wetland” (2014), both of which were self-sustaining spaces that involved agricultural components. “Swale” is supported by the New York Foundation of Arts, and involves significant collaboration with community organizations and local schools. Students at Dwight-Englewood School in New Jersey are helping to build the garden beds for the 50-foot-wide platform.

To be a part of the Swale, Get in touch and work with the collaboration to plan the edible ecosystem. The Swale will be open to the public at various boroughs in 2016, and individuals can partake in the caretaking and collecting of fresh food from it.

As a public sphere, the Swale strengthens collaborative approaches to working together, supporting each other, and interdependently producing the resources for daily needs. This kind of project paves pathways for public food to be grown in public spaces in New York and other areas around the world.

“A lot of what has been driving me is overconsumption and its inherent violence,” Mattingly explaines. “I want to further understand the inputs to and outputs from a city like New York, where the goods we consume are harvested from or mined, processed, transported from, and then buried after use.”

For more information and to support the project, please visit: www.swaleny.org.