Nearly one billion people around the globe are estimate to be homeless or live in substandard housing. In the era of 3D printing, some have addressed this crisis through quickly building concrete buildings. While this method would create a secure dwelling, delivering the raw materials and bulky printer increases the cost significantly, reducing its feasibility. The Italian 3D printing company WASP may have solved this problem by developing an easily-transportable machine that can quickly create dwellings out of mud and natural fibers—materials already available where the houses will be built.

Making houses out of mud is not anything new. In fact, humans have been constructing with mud and fiber binders for over 9,000 years. However, this new technique offers some extreme advantages. Extruding the mud in this manner drastically increases the amount of surface area, making it habitable much sooner than waiting for thick bricks to dry before construction can begin. Additionally, the triangular shapes between the walls make it stronger and capable of bearing more weight than traditional methods, all while using less material. It can make homes that are 10 feet (3 meters) tall, creating a spacious home. 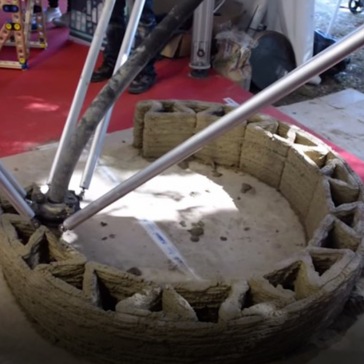 WASP featured a scaled-down version of the project earlier this month at Maker Faire Rome, a huge event showcasing innovative technology from all over the globe. Due to the constraints of space and time, they were not actually able to finish the house on site, but they were able to demonstrate a proof of concept and showcase a palm-sized model. 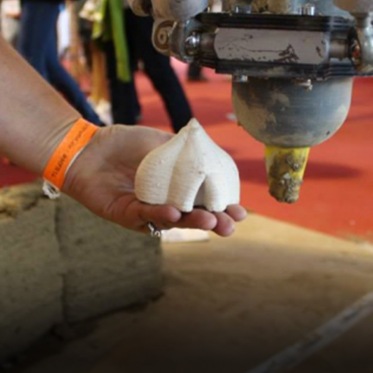 The printer itself is fairly minimalist in its design. The extruder head is supported by a tripod structure and it is fed a blend of mud and natural fiber, such as wool. This method also allows for the homes to take on attractive, architecturally-interesting shapes; owners can proudly flex their creative muscles.

WASP, which stands for World’s Advanced Saving Project, is committed to providing independent housing to impoverished people all over the world, while blending art and science. While it might seem odd for a company to invest in technology they don’t intend to profit from, this altruistic endeavor is being funded from their commercial sales of 3D printers which work with a variety of materials, from traditional plastic to ceramic which can be glazed and fired in a kiln.

The company claims to have gained inspiration from the potter wasp, which build nests shaped like clay pottery. The wasps blend mud and hair to create sturdy nests that protect their young from the elements.

WASP tentatively plans on building the first 3D printed home sometime next year. Though no official plans have been set for location, they are considering Sardinia, an island off the coast of Italy in the Mediterranean Sea. Though this is not the neediest place in the world, it’s situated close to the company. This will help them work out all the kinks in the process before they move on to more remote locations.

You can see this construction 3D machine in action here: