Mycologist Paul Stamets shares 6 ways that the mycelium fungus can be of great use, including building and cleaning polluted soil, making insecticides, and antibiotics to treat smallpox and flu viruses. Mycelium pervades all landscapes, it holds the soil together, and disassembles natural materials generating humus soils. The multi-directional transfer of nutrients between plants is mitigated by mycelium. In the early 1990s, Paul proposed that mycelium is Earth’s natural Internet. 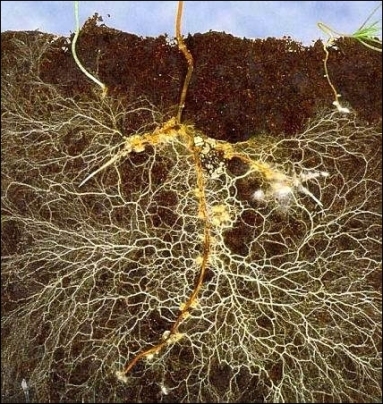 Fungi were the first organisms to come to land. They came to land 1.3 billion years ago, and plants followed several hundred million years later. In fact, «we’re more closely related to fungi than we are to any other kingdom. A group of 20 eukaryotic microbiologists published a paper two years ago erecting opisthokonta – a super-kingdom that joins animalia and fungi together. We share in common the same pathogens.”

Mushrooms produce strong antibiotics. Fungi don’t like to rot from bacteria until they sporulate at their prime, so our best antibiotics come from fungi. Even the microbes that occur on rotting mushrooms past their prime are essential for the health of the forest. They give rise to the trees and create the debris fields that feed the mycelium.

Once mushrooms sporulate, they spores germinate and mycelium forms underground. In a single cubic inch of soil, there can be more than eight miles of these cells. As the mycelium grows, it conquers territory and then begins the net.

They can be seen as “microfiltration membranes,” in Paul’s words. They have externalized stomachs and lungs breathing in oxygen, and as such are “extended neurological membranes.” As they grow and form micro-cavities, they fuse soils and absorb water, forming little wells microbial communities begin to grow. This way the spongy soil resists erosion, and has a diverse microbial universe in it.

Mycelium produces oxalic acids, and other acids and enzymes. Pockmarking rock and grabbing calcium and other minerals, it forms calcium oxalates and makes the rocks crumble, leading to the first step in generating soil.

The produced oxalic acid is formed from two joined carbon dioxide molecules. Thus fungi and mycelium sequesters carbon dioxide in the form of calcium oxalate. “And all sorts of other oxalates are also sequestering carbon dioxide through the minerals that are being formed and taken out of the rock matrix.”

Battelle Laboratories and Paul joined up in Bellingham, Washington for an experiment. There were four piles saturated with diesel and other petroleum waste: one was a control pile; one pile was treated with enzymes; one pile was treated with bacteria; and one pile we inoculated with mushroom mycelium. The mycelium absorbs the oil. It produces peroxidases enzymes that break carbon-hydrogen bonds. They remanufacture hydrocarbons into carbohydrates – fungal sugars.  In six weeks, there were hundreds of pounds of oyster mushrooms on the pile treated with mycelium, while other piles were dead, dark and stinky.The PAH’s, the aromatic hydrocarbons, went from 10,000 parts per million to less than 200 in eight weeks.

Once the mushrooms sporulated, the spores attracted insects, the insects laid eggs, eggs became larvae, and birds came bringing in seeds and forming an oasis of life on the former waste pile. As gateway species, fungi open the door for other biological communities.

Paul invented burlap sacks, containing bunker spawn, mycelium and storm blown debris. These sacks can be put downstream from a farm that’s producing E. coli, or other wastes, or a factory with chemical toxins, leading to habitat restoration. A site that he set up in Mason County, Washington, saw a dramatic decrease in the amount of coliforms. In 48 hours to 72 hours, a combination of three mushroom species reduced the amount of coliform bacteria 10,000 times. This is a space-conservative method that uses storm debris.

Agarikon, or Fomitopsis officinalis, is a mushroom exclusive to the old-growth forest that Dioscorides first described in 65 A.D. as a treatment against consumption. This mushroom grows in Washington State, Oregon, northern California, British Columbia, and now thought to be extinct in Europe. Preserving the genome of these fungi in the old-growth forest is believed to be critical for human health. Paul worked with the U.S. Defense Department BioShield program. He submitted over 300 samples of mushrooms that were boiled in hot water, and mycelium harvesting these extracellular metabolites. There are three different strains of Agarikon mushrooms that were highly active against poxviruses. Dr. Earl Kern, who’s a smallpox expert of the U.S. Defense Department, states that any compounds that have a selectivity index of two or more are active, 10 or greater are considered to be very active. These mushroom strains were in the highly active range. There’s a vetted press release that you can read – it’s vetted by DOD – if you Google “Stamets” and “smallpox.” Or you can go to NPR.org and listen to a live interview.

“We have three different strains of Agarikon mushrooms highly active against flu viruses. Here’s the selectivity index numbers — against pox, you saw 10s and 20s — now against flu viruses, compared to the ribavirin controls, we have an extraordinarily high activity. And we’re using a natural extract within the same dosage window as a pure pharmaceutical. We tried it against flu A viruses — H1N1, H3N2 — as well as flu B viruses. So then we tried a blend, and in a blend combination we tried it against H5N1, and we got greater than 1,000 selectivity index.”

There is also the entomopathogenic fungi that kill insects, such as carpenter ants, fire ants, and termites. The EPA recommends studies with metarhizium species of a group of fungi. Paul got the mycelium when it stopped producing spores, and morphed the culture into a non-sporulating form. Insects avoid spores when they come close. The non-sporing mycelium is consumed by insects, which become mummified. And after sporulation, the spores repel, making the structure no longer suitable for invasion. This makes for a near-permanent solution for reinvasion of ants and termites.

Paul also tried different extracts and discovered that insects can be steered to different directions. His supposition is that entomopathogenic fungi, prior to sporulation, attract the very insects that are otherwise repelled by those spores. Paul received an Alexander Graham Bell patent that covers over 200,000 species. This is the most disruptive technology – I’ve been told by executives of the pesticide industry – that they have ever witnessed. This could totally revamp the pesticide industries throughout the world.

Paul came up with the Life Box. You add soil, water, and have mycorrhizal and endophytic fungi as well as spores, like of the Agarikon mushroom. The seeds are mothered by this mycelium. You put tree seeds in the box and can practically grow an old-growth forest from a cardboard box.

Paul wants to reinvent the delivery system, and the use of cardboard around the world, so they become ecological footprints, so that carbon credits are sequestered by the trees that are coming through Life Boxes.

He developed a system for a refugee community, where you take a cardboard box, add water, corns, beans and squash and onions, and grow a seed garden that you can harvest.

Mycelium converts cellulose into fungal sugars. Paul came up with Econol, which generates ethanol from cellulose using mycelium as an intermediary. In his words, “These are a species that we need to join with. I think engaging mycelium can help save the world.”