The solar bottle lamp illuminates dark spaces during the day without electricity, by using a plastic bottle filled with water and a bit of disinfectant. A Brazilian mechanic Alfredo Moser had a light-bulb moment during an electricity blackout in 2002 and came up with a simple technique to light up his house using refraction of sunlight. The innovation has since spread throughout the world and is now in millions of homes. Each bottle averages an equivalent output of a 50 watt bulb depending on how strong the sun is. 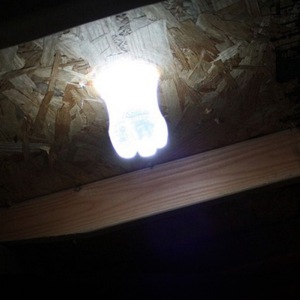 To make the lamp, a hole is drilled in a roof tile, and a bottle filled with water is pushed up into the hole. Alfredo recommends to “fix the bottle in with polyester resin. Even when it rains, the roof never leaks – not one drop.” He also adds into the bottle “two capfuls of bleach to protect the water so it doesn’t turn green [with algae].”

For humans, sunlight and vitamin D is critically important for the development and maintenance of a healthy body and mind. We need natural light during the day to help improve our mood and health.

Moser believes that “It’s a divine light. God gave the sun to everyone, and light is for everyone. Whoever wants it saves money. You can’t get an electric shock from it, and it doesn’t cost a penny.”

Moser has installed the bottle lamps in neighbours’ houses and the local supermarket. “There was one man who installed the lights and within a month he had saved enough to pay for the essential things for his child, who was about to be born. Can you imagine?” he says.

The method is particularly beneficial in countries where electricity is unusually expensive and there are possibilities of blackouts. It’s also possible to grow food at small hydroponic farms using the light provided by the bottle lamps. The technique has also caught on in about 15 other countries, from India and Bangladesh, to Tanzania, Argentina and Fiji.