The key to renewable energy is storage so that electricity supply can meet the demand regardless of the weather conditions. Donald Sadoway is working on a large scale solution – Ambri – an inexpensive, efficient, three-layered battery using “liquid metal.” The technology is silent, emissions-free, involves no moving parts, is remotely controlled, and designed to the market price point with no need for subsidies. 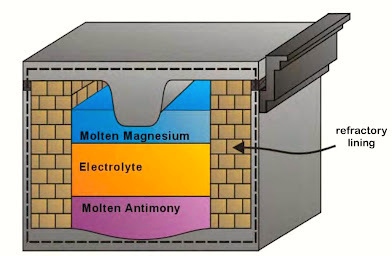 Donald believes that “with a giant battery, we’d be able to address the problem of intermittency that prevents wind and solar from contributing to the grid in the same way that coal, gas and nuclear do today.”

The first battery was invented about 200 years ago by Alessandro Volta at the University of Padua. It was made of a stack of coins, zinc and silver, separated by cardboard that was soaked in brine. These form the basis of designing a battery: two electrodes (metals of different composition) and an electrolyte (salt dissolved in water in this case).

Using the basics, Donald set out to design a large scale battery that’s capable of meeting the demanding performance requirements of the grid, including uncommonly high power, long service lifetime and low cost. To do this he realized that the battery needs to be made out of earth-abundant elements, and it should be built using simple manufacturing techniques.

He identified a pair of metals that are earth abundant, have opposite density and high mutual reactivity. These are magnesium for the top layer and antimony for the bottom layer.

The battery is charged by being connected to a source of electricity, such as a wind farm. The current is reversed and forces magnesium to de-alloy and return to the upper electrode, restoring the initial constitution of the battery. The current passing between the electrodes generates enough heat to keep it at temperature. The battery is designed to operate at elevated temperatures handling any current surges.

You can learn more about this technology at Ambri and watch Donald make a presentation about it at this TED Conference: