A 14 years old Malawian inventor William Kamkwamba built an electricity-generating windmill from spare parts, working from rough plans he found in a library book “Using Energy.” He used a bicycle frame, a pulley, and a plastic pipe. Generating 12 watts of electricity – enough to power four light bulbs and two radios for his family.

His next aspiration was to build another one producing more than 20 watts – to pump water and prove irrigation for the village crops. 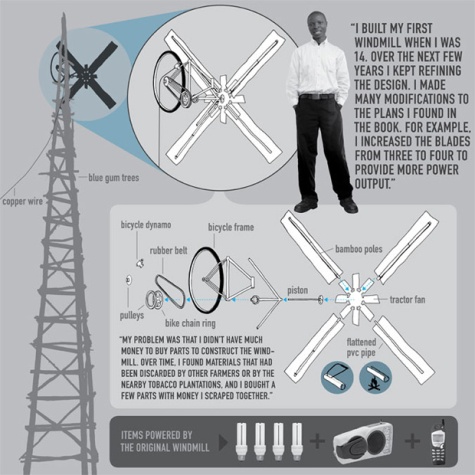 He started the Moving Windmills Project to support “Malawian-run rural economic development and education projects in Malawi, with the goals of community economic independence and self-sustainability; food, water and health security; and educational success.”  You can learn more about the current initiatives and donate to support the project.

You can read William’s book “The Boy Who Harnessed the Wind” and watch him present his design at this TED conference: